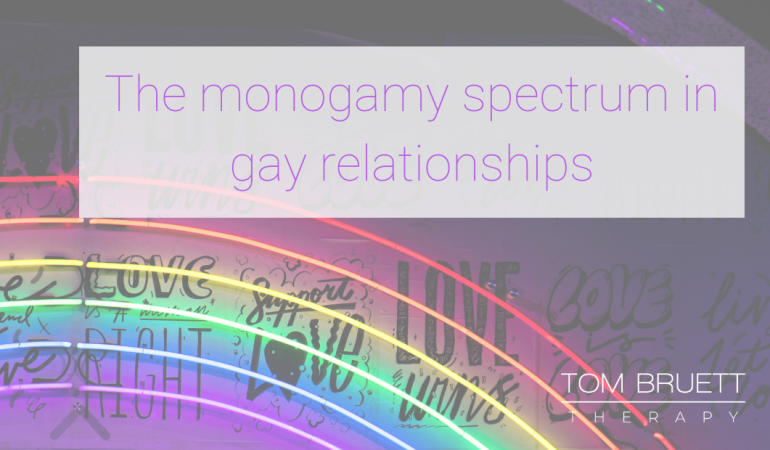 A beautiful thing about LGBTQ relationships is that we don’t have to blindly follow heteronormative coupling constructs.  We can create relationships that work for us. Along those lines, there is a spectrum from monogamy to ethical non-monogamy open for gay couples to explore.

The monogamy spectrum in gay relationships

When I talk about monogamy, I’m referring to a committed relationship with one person.  Typically, you’re only having sex and being intimate with that one person.

This is a term for couples who are mostly monogamous, except in certain specified instances when they may choose to add partners.

This is a type of non-monogamy that describes a non-monogamous relationship that is fair, open and transparent.  The term ethical implying the intention is that no one gets hurt.

If we think about monogamy along a spectrum, most relationships will fit somewhere along the continuum.   While there certainly have been variations of non-monogamy in the past, this concept is becoming more and more familiar.

What do the numbers say?  The Couples Study, compiled by Blake Spears and Lanz Lowen, used in-person interviews, Facebook and Grindr data and online surveys to conduct in-depth research into the coupling data of gay men. 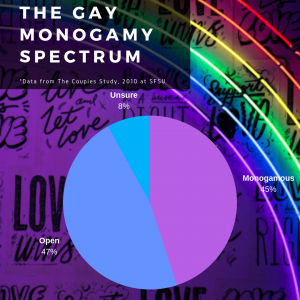 Surprisingly, both monogamous and non-monogamous couples felt they were being judged by each other for their sexual choices.  Not surprisingly, all gay men were longing for more community support.

Most of us know the feeling of walking into a gay space and feeling judged.   Why do we do it to each other and ourselves?

Instead of being supportive of those in our community who choose to have different relationship structures, some of us are being judgmental, mean and even slut-shaming our feel gay friends.

Think Hester Prynne and The Scarlet Letter.  Typically, slut-shaming is used in the straight world as a way to control and restrict women.  Women are shamed and humiliated for being open and comfortable with their sexuality.  Hypocrisy at its worst, because men are usually celebrated for the same type of behavior.

However, this concept is creeping its way into the gay community.

Talking openly about your relationship

If you’re going against the relationship norms in our heteronormative, mainly monogamous society, you’re going to come up against pushback.  Whether from family or friends, someone is bound to give you a negative reaction.

However, just like coming out about your sexuality, its important that you’re able to live freely and openly as your authentic self.  Like coming out of the closet, start with those you think will be most supportive and expand from there.  The more we can talk openly about our relationships, the easier and more normalized they will become.

There was a time, pre-HIV and AIDS when many members of the gay community were more sexually free.   After years of being oppressed and persecuted for having sex and being gay, the 1970s and 80s brought about a freedom of sexual expression that was politically and psychologically important.

After the AIDS crisis hit, sex became a dangerous thing for gay men. An entire generation of our brothers was wiped out. The bathhouses closed and the sexual revolution was quickly extinguished.  Sex became linked to disease and dying.

In 2014 the FDA approved PrEP, a once daily pill to prevent HIV infection in people without the virus.  While PrEP is not recommended to replace condoms, it can provide extra security and protection when engaging in sexual activity.

An entirely new generation of gay men can take a daily pill and have less fear about sex.  This has dramatically increased the numbers of men having sex with men without condoms, which has spurred an increase in STI numbers, but that’s another topic.

I’m not a medical doctor and make no claim to be one, however, using or not using condoms is a personal choice and we must respect and honor an adult’s right to make choices about their body and sexual health.

What kind of relationship do you want?

Whether you and your partner(s) decide to have an open, somewhat open or closed relationship, there are some tools that you can use to help with the process.

What will make you feel safe in your relationship?  It’s important to be able to talk with your partner about what kind of relationship you want to have.

By clearly articulating your fears, wants and needs around your unique relationship you can avoid unnecessary hurt and conflict down the road.

Are threesomes acceptable? Can you have sex outside the relationship? If you do have sex with someone else, does your partner want to know about it?

These are important conversations to have with each other.

Most relationships can benefit from improved communication. Whether you’re monogamous or not, being open about your wants, needs and desires can create an atmosphere of safety and connection.

There’s nothing more frustrating than talking past one another. Work on reflective listening skills, empathy and compassion.  They can go a long way toward strengthening your relationship.

In order to establish trust and avoid betrayal, honesty is an essential part of any relationship. It can be scary and vulnerable to be completely honest with another person. However, without a foundation of honesty, many relationships will wither, struggle and die on the vine.

Feeling jealous in an open relationship is perfectly natural.

The trick is not to limit the range of emotions we feel, rather decide what we want to do with the emotions when they come up. Because they will come up.  For example, you may feel jealous if your partner sleeps with another person, but feeling jealous in and of itself is not the end of the world.  How you manage and communicate those feelings are crucial to relationship success.

We’re in an age when we can decide what type of relationship structure works for us. For some, a monogamous relationship is crucial to feeling safe and secure. For others, there are various non-monogamous arrangements that can allow for safety, security, increased intimacy and not to mention fun.

There are a number of resources for couples looking to open up or change the structure of their relationship.

What do I do when jealousy comes up?

One of the main questions that comes up about non-monogamous relationships, is what to do when jealousy creeps in.  Here are some tips and tools to help you begin to deal and process the jealousy that may come up.

Sit with the feeling. Try and understand it without judgment. Are you scared that you may lose your partner? Are there ways your partner could make you feel more secure? The first step is understanding what’s going on inside you and then you’ll be better able to ask for what you need.

Take a moment before you react. In primary attachment relationships, small actions can sometimes cause big reactions. Take a moment to calm and soothe yourself before beginning a tough conversation with you partner about your needs or fears.

Give yourself a pat on the back. Open relationships take a lot of work! They require trust, honesty and communication on a level that can be pretty intense. Take a moment to validate the progress that you have made so far.

Communicate with your partner. Make a pact to only communicate about sensitive topics when you’re both feeling calm and grounded. Make sure you know what you are feeling or needing before you begin making requests from your partner.

Turn toward each other. This is a technique often spoken about by John and Julie Gottman, leaders in couples therapy research. When your partner does reach out to begin processing or looking at tough emotions, make space for them. They’re more than likely making a bid for connection and putting themselves out there in a vulnerable way.  Turn toward them, instead of turning away and making the situation worse.

Hopefully this article provided a brief overview of some different relationship structures and how to begin talking about this topic with your partner.  Be sure to reach out for support if this is causing conflict or pain in your relationship. 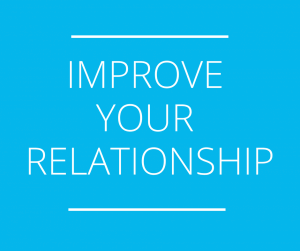