I provide video individual and couples therapy for those living in California and Colorado. Schedule a free video consult here. 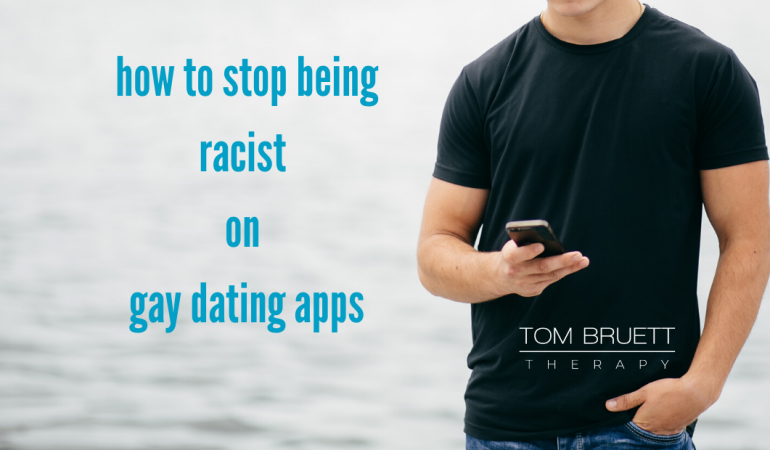 If you want to reassure yourself that racism is alive and well in gay male culture, just open Grindr or Scruff.  You will see countless profiles that say simply put: “No (fill in the racial group)”.  No Asians.  No Blacks.  And the list goes on.  These are blatant, hurtful forms of racism and if you doubt that, please keep reading.  This article is for you.

Race is not the same thing as preferences

Now some people may be reading this and getting defensive.  You may be thinking, I’m not being racist, I’m just listing my preferences.  If I’m looking for a bottom, I say “No tops.”  How is this any different?  Well friends, this is the very definition of racism.  You’re singling out and discriminating against an entire group of people based on their race.

I’ve also heard the argument, “well I’m just not attracted to (fill in the racial group here)”.  People may claim that attraction is not changeable.  As members of the LGBTQ+ community we are rightly skeptical of anyone who tells us that attraction is a choice.  If you’re gay, you can’t suddenly be attracted to the opposite sex. Sexual orientation and gender identity are not a choice.  Period.  However, attraction is based on more than just physical attributes.

For this we need to look to our culture at large.  For a moment, call to mind the first image of the quintessential attractive American guy based on what movies, fashion and the media has impressed upon you.  For most of us, if we’re honest, a white guy with a six pack, lots of muscles and full head of hair will come to mind.  How many movies are made that star Black, Indigenous and People of Color (BIPOC)?  Historically, not very many.  Though thankfully this is changing.   This is a culture of white supremacy in action.

Looking at your bias

Think about it, our country was founded on the racist idea that white people are superior to all others.  This allowed us to believe that taking land from Native Americans, enslaving black people, encamping Asian-Americans during World War II, and currently encamping Mexican children at the border is an ok thing to do.  It’s the same belief that allows gay men to write “No (fill in the racial group) on their Scruff profiles today.

If you’re a white guy reading this and getting defensive, good!  This is uncomfortable and it’s the only way forward.  I’m a gay white guy.  It can be hard to hear and accept that I’ve been raised in a culture of white supremacy and I need to work harder to challenge my own racism.  It’s uncomfortable as hell to look back on my own history and think about the ways I’ve either felt, acted or been racist.  All sorts of guilt comes up.  All sorts of shame.  But this is my work and I’m committed to it.  It’s not the responsibility of BIPOC folks to change my internal racism.  It’s my work.

But we’re part of a minority group ourselves

Another argument I’ve heard from some other gay guys is that we are a minority group ourselves, we can’t be racist.  Sorry.  They’re not mutually exclusive.  Just because you’ve experienced oppression doesn’t mean that you can’t also be an oppressor.  In fact, like the bully who has often been bullied themselves, it may make us more likely to oppress others.

There are also those white guys among us who are only attracted to a certain type of race.  For example, white guys who are only into Asian men.  This is often objectification.  When you objectify someone you strip away their humanity.  If you fall into this group, do some exploration about why that may be the case.

What can you do about it?

If you’re still reading this, then perhaps some of the above ideas ring true to you.  You may be feeling guilty, ashamed, sad, angry.  That’s good!  Now what can you do about it?  First off, educate yourself. This is work you have to do on your own.  Don’t expect the BIPOC in your life to play the role of teacher.  There are tons of books, podcasts, webinars out there to help you look at your own biases.  Here are a couple that I have found useful.

Seeing White– This is 14 part podcast designed to explain the history of racism in our country and what we can do to become better.

Scaffolding Resource List– This list includes a ton of great information, even for those among us who feel they are the most liberal and woke.

We need to talk about race.  We need to educate ourselves.  We need to be better allies.  This is how we can do our part to change the systemic racism alive and well in America today.

Posted in Racism, Therapy for Gay Men and tagged becoming an allie, racism in the gay community, white guilt

Something went wrong. Please check your entries and try again.
← 10 tips to care for your mental health during the coronavirus (COVID-19) pandemic that are low-cost or freeTips for dealing with quarantine fatigue in your relationship →
Scroll To Top